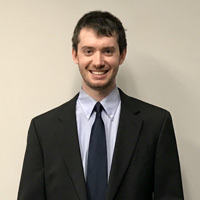 Ben joined Gordon & Simmons as an associate in February 2018.  He is excited about the opportunity to work with the attorneys at the firm, and hopes to continue Gordon & Simmons’ reputation for excellent representation.

When he is not working, Ben is usually spending time with friends and family, especially his wife and young daughter.  He is also an avid football fan, and enjoys playing Ultimate Frisbee.