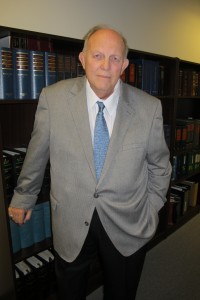 After spending a summer working on Wall Street, upon graduation from law school Roger began his career in Washington, D.C. as an antitrust lawyer practicing with the firm of Howrey & Simon, a large firm that concentrated on national commercial litigation. Roger was with Howrey from 1971-1984, during a period of tremendous growth for the firm. When he began his career with Howrey & Simon, he was the firm’s 25th attorney. By 1984, and as a partner at Howrey, he was one of more than 100 attorneys then working with the firm on matters including intellectual property, antitrust and regulatory disputes. Roger represented some of the country’s largest companies including Anheuser-Busch, Shell Oil, Exxon, Wagner Electric, Kmart, Ashland Oil, and APAC, among others.

After leaving Howrey & Simon, Roger became a founding member in the K Street law firm of Steele, Simmons and Fornaciari, where he practiced until 1987, when he left that firm to found Gordon & Simmons in Frederick, Maryland with his old friend and former partner at Howrey & Simon, Ralph Gordon.

Roger has had the opportunity to debate Ken Starr on public court television, to share lead counsel duties with Johnnie Cochran, to represent national television producers and newscasters, as well as best-selling writers, and to confront some of this country’s leading newsmakers. Roger has represented churches and charities of all denominations, negotiated with top federal special prosecutors and encountered some of the best legal minds of our generation during his time in the law practice. As the managing member of Gordon & Simmons, Roger has prided himself on his human touch and his ability to deliver affordable and effective representation to both the small business owner and to individuals.

Roger spent the first 17 years of his career representing large corporations in major case litigation across the country. Even after coming to Frederick to practice regional litigation with his close friend, Ralph Gordon, Roger has continued to engage in high stakes disputes. While leading Gordon & Simmons, Roger has personally settled cases for his plaintiff clients with recoveries including: $1,900,000; $3,200,000; $4,000,000; $9,800,000, and $14,400,000, among other successful representations. While most commercial litigation practitioners work exclusively on an hourly basis, Roger and Gordon & Simmons have undertaken cases on both contingency and a mixed fee basis, investing in his clients and their causes. In all his cases, Roger’s goal is to ensure that his clients receive fair value for their investment.